Skip to content
HomeOpinion: Can we get industrial emissions down?

Can we get industrial emissions down?

Shh! Don’t look now, but carbon pollution is all around you, locked up in the PC/phone/tablet you’re reading this on!

Melodrama aside, it’s worth remembering on an individual level that almost everything manufactured in the room around you will have some greenhouse gas emissions associated with it, particularly if plastic or metal is in it. So even if you a conscionable citizen who drives an electric car powered only from electricity from renewable sources and have your home heated by electric or hydrogen heating, you will still be responsible for emissions somewhere (unless you own absolutely no worldly possessions at all, and if so, what are you reading this on?).

Next to electricity, transport, heating sectors and so on, industrial emissions, especially in a country like the UK where we often lament long term decline of industry, immediately seems a lower priority. And why not? After all, industrial processes are a lot harder to replace with low carbon alternatives – electricity has renewables, nuclear and carbon capture, transport has electric cars, and even heating is making low carbon breakthroughs. But industrial emissions will still have to be acted on some day, and that looming sense of obligation will only increase as emissions from other sectors goes down – industry will become a bigger part of the pie.

Here is where we run into problems. Let’s go to a hypothetical time where the UK has a completely low carbon power system, all vehicles and heating are powered by that system or a low carbon alternative, and an anxious government is looking at the large proportion of remaining emissions from industry. How does that come down? For a start, it’s worth pointing out that emissions from industry are expected to decline anyway, due to increasing efficiency standards and falling industrial output. Even so, that only is expected to reduce emissions here from around 100Mt now to 90Mt in the early 2030s.

It’s estimated in more stringent scenarios that industrial emissions could fall below 32Mt, the main problem being processes which have to burn fuels as part of the overall process being difficult or impossible to replace. Then what? We do have one additional but precious factor in our favour here – time. While sectors like electricity and transport need to reduce emissions very quickly, as they form the backbone of reductions in other sectors, industrial emissions aren’t seriously anticipated to come down until the 2030s, meaning if you’re a worried policy maker or DecarboniseNow reader there’s at least some additional time to start researching technical solutions now to combat this. But in some ways that’s a cop out answer, hanging hopes that all these industrial processes can be combated by some mysterious future technologies, isn’t it? Well, yes. And that’s the scary thing; many solutions to climate change are on the ground, ready or semi ready to go. In this case there’s an awful lot of hope on something turning up later.

So what can we do, here and now, for those of us who aren’t research and developers for the iron and steel industry or in government? Well, first and foremost, put 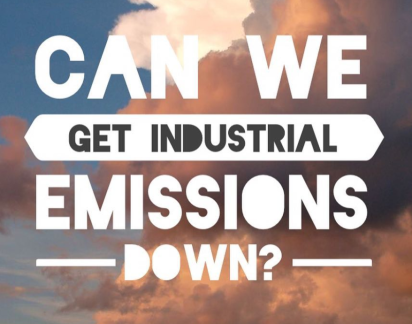 pressure on areas that decarbonise quicker, like power and transport. While it might seem counterintuitive, few government officials are likely to put huge resources in an area that will do less than another – whilst industrial emissions are a smaller part of the pie, there’s far less incentive to do anything about them. Correspondingly, the quicker the ‘easier’ parts of the economy are decarbonised, the quicker more attention can be put and is likely to be put towards the looming spectre of industrial emissions. Second, whilst all this is going on, a smaller movement can be encouraging research and development into reducing emissions from industrial emissions beyond what is already being speculated and tested. And third, which in part this article is doing, raise awareness into the public consciousness the importance of emissions from industrial sources. Many of us in Britain are unaware we even have iron and steel furnaces still in this country, let alone the huge proportion that it and other industrial processes have on this country’s greenhouse gas emissions.

There’s no easy way of putting it – industrial emissions are a huge pain, both technically and politically, to solve as part of the climate puzzle. But while our attention should definitely be prioritised on other areas, ignoring industry is not an option either. Debate around industrial emissions and more active engagement with others needs to be kick-started now, so we can be ready by the time we need to be.