Christmas may not be turning out quite a relaxed as many of us expected to be. However, with an election underway, it gives a good opportunity to take stock of where political parties are when it coming to phasing out polluting cars and vans. Particularly as we’ve just had the first of hopefully many more climate debates!

The Conservatives: The party have pledged to review the current 2040 mission to phase out conventional vehicles, but don’t declare an official position. At the Conservative Party Conference of 2019, then transport secretary Grant Shapps stated that he would ask the cabinet for a 2035 phase out. The party also wants to invest £1bn in 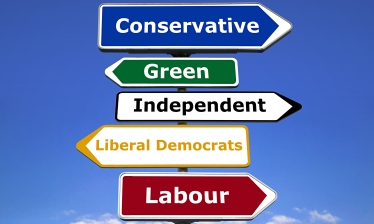 rapid charging infrastructure, and have at least one gigafactory in the UK.

Labour: Labour do support our goal, but the wording of the manifesto states they will aim for a 2030 ban, as opposed to a more stringent statement from other parties. Their manifesto also states a wide and detailed range of further incentives for electric vehicles to make up two thirds of the light vehicle fleet by 2030. Labour also commits to funding new charging infrastructure, and having three new gigafactories in the UK.

The Liberal Democrats: Their manifesto says that the party will ensure conventional cars and vans will face a ban by 2030. They also outline a range of further incentives for EVs between now and 2030, which include cutting VAT and tax reform to make electric vehicles cheaper.

The Green Party: The Green Party fully support a ban on conventional cars and vans by 2030. Their manifesto aims to provide incentives for electric vans, coaches and lorries, and prioritises reducing car usage more than other parties.

The Scottish National Party: The SNP advocate the whole of the UK to follow Scotland’s 2032 ban on petrol and diesel vehicles. It also supports further incentives such as tax incentives and loans.

Plaid Cymru: The party supports phasing out conventional cars by 2030. This does not include vans, and it is unclear whether phasing out means a ban on or simply a majority of cars to be electric by 2030.

(Note that no party distinguishes defines what ‘conventional’ vehicles mean, allowing for future hybrid variants of vehicles that go against our campaign goals and will lead to higher emissions and make it harder to get to net zero).

So that does this all mean for DecarboniseNow? Whichever party comes into power, we are still determined to follow through on our campaign goals. Our starting point will however be different depending on the manifesto commitments above. Securing a binding ban will be our priority for parties that do not have this in their manifestos, and for parties that already have one, assisting them in implementing and designing this will be our main priority, including phasing out hybrid vehicles. Either way, we are determined that the next government will be signing up to one of the most ambitious transport decarbonisation policies anywhere in the world, and take an enormous leap forward in ending our contribution to climate change.

In the next month, we’ll continue to build up a coalition of allies who support our goal, reaching out to relevant industries. We’ll also be in touch with the new government and transport minister to set out our goal for their new government. We’re also aiming to build a wider media campaign in the New Year – keep an ear to the ground for more! We hope you enjoy Christmas and we will see you in 2020.